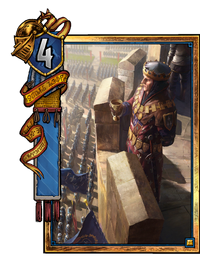 The Northern Realms seek to gain control of the battlefield by reinforcing their numbers. Their valiant commanders march in the front lines to inspire their units and boost their strength. Their troops can be protected against attacks and weather spells thanks to Armor and Shields.

Retrieved from "https://gwent.fandom.com/wiki/Northern_Realms?oldid=45272"
Community content is available under CC-BY-SA unless otherwise noted.